What Do Your Web Fonts Say About Your Company? 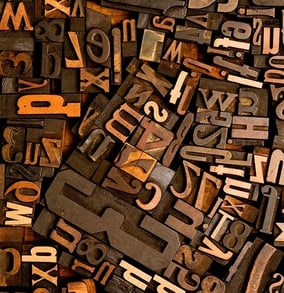 The most powerful way your website can engage its visitors is through its content. For many of us, content usually means text: a powerful headline to grab attention and a set of bullet points or paragraphs that offer useful info. With the possible exception of strong verbiage in a headline, what the text physically looks like is the first interaction between your content and your visitor. That simple idea powered the history of typography (making letters and words look a certain way), and led to the multitude of fonts we use today. So, to better understand the interaction between your website’s content and your visitor, let’s take a closer look at some of the Internet’s most widely used fonts.

These fonts are based on the list of most popular web fonts compiled by bonfx.com.

It’s everywhere. Arial was created in the early 80’s and designed to live on screens. It also was designed to closely match Helvetica in certain ways. Type nerds classify it as a neo-grotesque sans serif, which simply means its stylistic ancestry dates back to the 1800s when it became popular to not put little flares (also called serifs) on the ends of the lines that make up the letters. This style became popular again in the mid 1900s, and it soon grew into an internationally accepted style.

Arial itself is important in the history of digital fonts, as Microsoft adopted it early on as part of its set of computer fonts. Regardless of what critics may say about it being over-used, Arial remains very familiar, versatile, and readable.

The history of Georgia is similar to Arial in that it was designed primarily to be used on the screen. Made in 1993 for Microsoft’s early package of fonts, it has now become a go-to option for displaying internet text. Unlike Arial, Georgia is a classified as a serif font, which means it has little flares on various points of the letters. Serifs have been popular in print since the Renaissance. Technically, it’s a transitional serif, which means it has subtle features invented in a time period when printing and paper were becoming more refined.

A serif font on the web tends to remind us of books and newspapers, which can communicate trustworthiness or an old-school feel – a great option for companies focused on strong brand messaging.

Created in 1957, Helvetica is another neo-grotesque sans serif. Its design is based on Swiss typefaces from the 1800s. Its extreme popularity is due to several converging factors of the post WWII era, including the international influence of Swiss design. Helvetica was revamped in the latter 1900s as Helvetica Neue, though that doesn’t necessarily mean that one is better than the other.

Helvetica, although heavily used both in print and on the web, is still a strong option for fresh website design. In large text sizes, it can communicate boldness and confidence.

Gotham, made in 2000, was inspired by 1950s-era street signs in New York City. It is a geometric sans serif, which means that the shapes of the letters generally adhere to geometric forms like circles and triangles. This visual language comes from the modern art movements of the mid 1900s. Barack Obama’s 2008 presidential campaign famously used Gotham as its main font - a bold statement that became a part of his very successful political brand.

The geometric sans serifs communicate a sense of modernism, mathematics, and architecture. Gotham, while connecting to the strength and stability of those concepts, can also remind us of the “HOPE” we once had.

These are just a few of the immense variety of fonts available for your website design. Each one has its own story to tell, and each one has its own way of helping your company tell its story. If your website’s fonts aren’t discussed here, hopefully the backgrounds of these popular fonts have inspired you to research the cultural significance of your own fonts.

Feeling inspired to take a fresh look at your company’s website? Download the 10 Step Checklist for Your Next Website Redesign to learn more about the factors that go into creating a great website for your company.