The first thing you notice when you start researching the origins of April Fool’s Day is that THERE ARE A LOT OF DRAMATIC THEORIES that usually end with the author saying, “But that’s probably not it.”

There are multiple stories about the changes in the French and British calendars that moved the start of the new year from the Christian holiday of Easter at the end of March to January 1.

The Museum of Hoaxes describes the one in France thusly:

Yes. There is a Museum of Hoaxes. How cool is that?!In 1564 France reformed its calendar, moving the start of the year from the end of March to January 1. Those who failed to keep up with the change, who stubbornly clung to the old calendar system and continued to celebrate the New Year during the week that fell between March 25th and April 1st, had jokes played on them. Pranksters would surreptitiously stick paper fish to their backs. The victims of this prank were thus called Poisson d'Avril, or April Fish -- which, to this day, remains the French term for April Fools -- and so the tradition was born.

When that the monthe in which the world bigan
That highte March, whan God first maked man,
Was complet, and passed were also
Syn March bigan thritty dayes and two

Apparently this passage caused great debate among Chaucer scholars as to whether Chaucer was talking about May or April.
Historians debate the importance of it too as useful historical evidence. So it is a thumbs down on the Chaucer link to April Fool’s Day.

Is April Fool’s Day an outgrowth of the custom throughout centuries to host Spring Renewal Festivals? Many theories abound that link the celebrations celebrating the end of winter and the return of spring across most of the world with the origin of April Fool’s Day. Humorous reenactments and jokes that include role-switching between the rich and the poor are often part of these festivals.

April Fool’s Day has much in common with this concept. It’s a chance to punk friends, family, and fellow employees without impunity. Unless you GO TOO FAR (in which case there may be penalties or revenge).

When Proceed the Custom of Making April Fools?

People have been wondering for centuries about who or what started the custom of April Fool’s Day. The quote “When Proceed the Custom of Making April Fools?” was published in 1708 in the British Apollo magazine.

The puzzle still remains as to the exact origin. But the practice of ambushing the unsuspecting on April 1 continues! 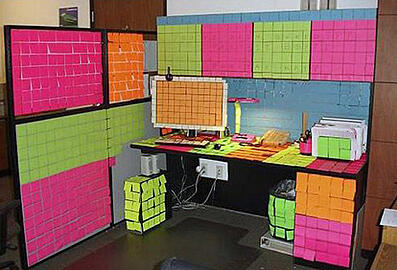 What are your favorite April Fool's pranks? Tell us about them below in the comments!

Also, don't forget to sign up for our blog.