Has LinkedIn lost its way?

The first time I got an email notification that one of my LinkedIn business associates had endorsed me for a some of the skills I have listed in my profile, I was surprised and flattered: Wow, Joe thought enough of me to actually take a proactive action and single me out for recognition of my Marketing skills! I hadn’t talk with Joe for years and yet there it was, his endorsement of my Lead Generation and Digital Marketing skills. I rushed to send him a thank you note.

Then I got a few more, and a few more, and I suspected that LinkedIn had made some changes in the system to encourage this sort of thing. And then I saw it for myself…right there at the top of my Notifications Page was a new call out box with the names and photos of four of my connections.  The system was asking if I wanted to endorse each one of them for some randomly selected “Skill” that each person had listed in their personal profile.

Well, it only seemed like the courteous thing to do.  Even though some of those connections I hadn’t seen in ages, and despite the fact that I had no idea if certain connections possessed any real expertise in the skill listed.  It was just so easy to hit Endorse on each one.  Better yet, there’s even a button to Endorse all four connections at once!  How convenient! 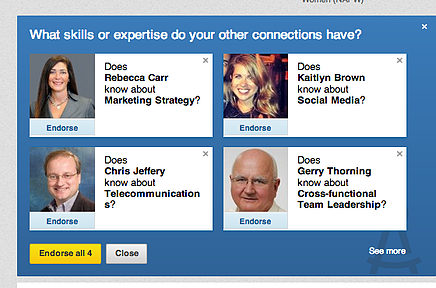 And you know what’s even more convenient?  After I endorse each one, the screen updates with more of my connections, asking for more endorsements! I found it so satisfying to click on them and send people I know a little pat on the back.  Until I was presented with someone that I’m connected to, but I don’t really care for (we all have a few of those!).  Now I had a dilemma – should I go ahead and endorse them because it’s the “Nice thing to do”?   Hey, it’s not like I wrote them a real recommendation.  Should I be sure to click on everyone, so they’ll return the favor and my little list of endorsements at the bottom of my profile will keep growing?  And if I want to shore up the number of endorsements I have for certain skills, should I start a campaign to ask my connections to endorse those specific skills?

And that’s when it hit me. This is a sham.  A silly little online game ala Farmville – how many endorsements do you have?

The value of a large LinkedIn network is not to show how popular you are and it’s not to play games. It’s to make real connections that can be used to learn, to share, and to network.  I use LinkedIn as a trusted resource, but I can assure you that I place absolutely no value in the Skills endorsements I see on anyone’s profile.  And until LinkedIn changes the program, I urge you to place no value in them either.

And I have to ask – what’s the real game at play here?  LinkedIn built itself into THE most used and trusted social media site for business networking. For recruiters to find the best candidates, salespeople to identify prospects who truly have a potential need, and business professionals to share best practices and useful information on ideas and issues of comment interest.

The new Endorsements Program meets none of those objectives, and instead tarnishes their well-developed reputation. For what? To test the potential for gamification within this platform? To increase overall interaction and appear less “business”, more fun?  To support ad rates by demonstrating growing engagement?

Whatever LinkedIn’s motivation to start this game, my vote is to STOP PLAYING IT. Hopefully. LinkedIn will go back to adding tools that increase the confidence of the site’s information and the connectedness of the right groups of business professionals.

What do you think?